When we created a meme about crypto mining and electricity theft a few months ago (see below) we thought it a good joke. It turned out these two concepts have a long history. Here are the most creative thieving crypto miners we could find.

Chinese police found a mining operation hidden in would-be graves near an oil field. The mounds were admittedly a bit big, perhaps with a more conservative rig the deception would have rested in peace.

A Chinese school principal set up a mining rig in his school‘s basement. It comprised nine miners, one belonging to his similarly entrepreneurial deputy. When the employees complained about the noise he blamed it on AC and heaters. Technically, that was quite correct.

A Hungarian politician was caught mining crypto on his office equipment. He most certainly did not think big as he was using only his official equipment, no clandestine miners from home. Still the excess electricity cost was enough for him to resign from his post.

Seen one electricity thief in China, you‘ve seen them all. This enterpising fellow concealed his computing power underneath a set of kennels, stealing electricity from, you guessed it - an oil field. Hopefully the rig was well insulated.

Turns out electricity theft can happen anywhere, even in countries notorious for being orderly and proper. Six individuals in Germany ran an illegal mining unit in Saxony for over two years. When the cops came knocking, they came in style, all 121 of them to be exact.

This is the case which caught our attention. The British Police were firmly convinced they are about to take down a cannabis farm, whereas everything they got was a lowly thieving crypto rig. We wonder whether they were disappointed with the spoils.

As crypto prices rise, covert mining seems to have become a serious criminal alternative to cannabis farming. While mining might offer lower margins, the zero distribution cost and lower legal risk seem like reasonable criminal incentives. Most cases seem to be now centered in countries in Asia with cheaper electricity. Industrial locations are particularly attractive, as electricity consumption variance is less detectable there. With renewable sources driving energy prices down and power grids becoming smarter more developed countries should see a reduction in large scale illegal mining cases. Till then we will just grab the popcorn and enjoy all the weird gimmicks used to conceal the theft. 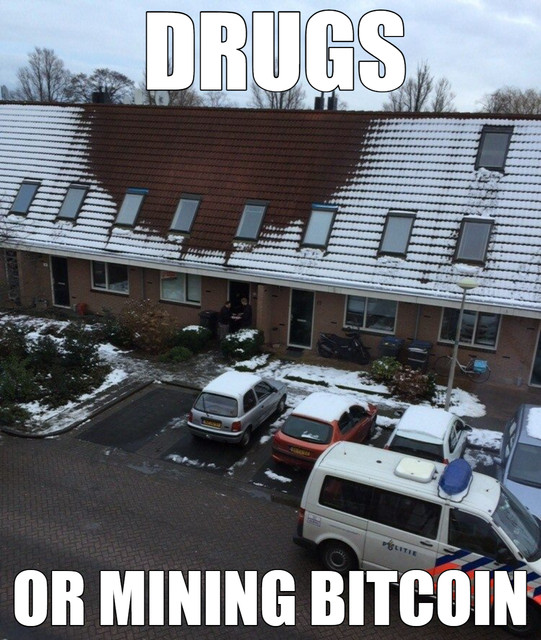